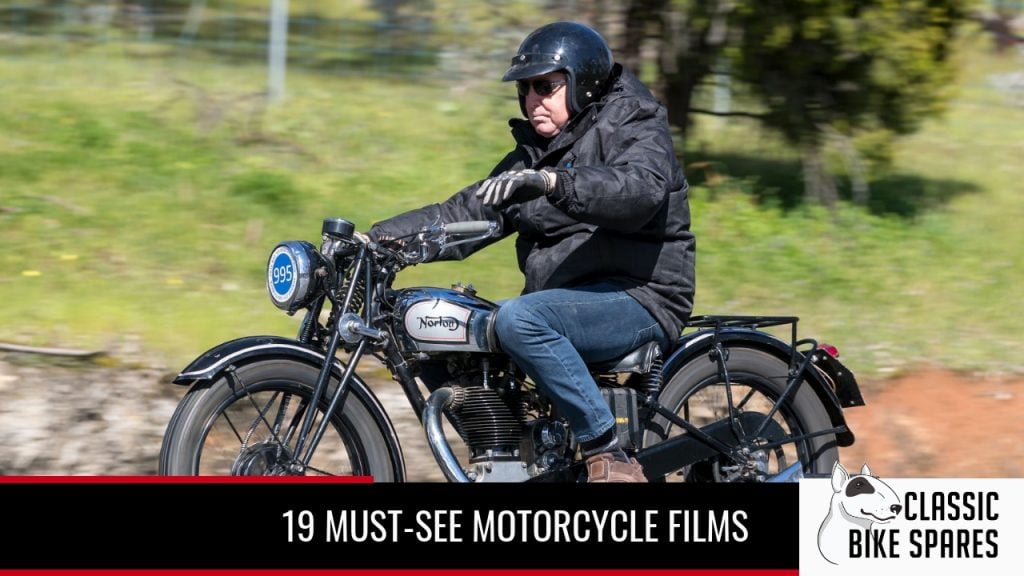 The thrill of riding a motorcycle is hard to imitate. However, when you’re not out riding or fixing up your motorcycle, you can vicariously live through others who are, in these films.

Grab some popcorn and get comfortable, here are 19 must-see motorcycle films:

Their route took them from London, through Central Asia, Kazakhstan and Siberia; then from Alaska to Chile and finally from Cape Town through Africa and the Middle East back to London.

It’s the perfect inspiration for you to plan your next big bike trip!

Daniel Rintz has a dream to travel the world by motorbike.

“There was nothing I wanted more that to travel the world by motorbike. And I was sick of only dreaming about it. So instead of saving up first I decided to go and make money along the way.”

Daniel Rintz is a professional film maker and photographer. To make the film Rintz raised money through a successful kickstarter campaign and spent a year editing all his raw footage. The film shows stunning imagery and follows a well-told story.

View more about his trip on his blog.

The film charts the Isle of Man TT motorcycle race that takes place on the Isle of Man every year. The film was released in 2011 and follows the leading riders in the 2010 race, most notably Guy Martin and Ian Hutchinson.

The Isle of Man Tourist Trophy is known as the most dangerous and deadliest event in the sport.

This British documentary, shot in 3D, is narrated by Jared Leto and is the seventh highest-grossing documentary in the United Kingdom.

Watch the trailer below:

Filmmaker Bruce Brown shows motorcycle racers, including Steve McQueen, and forms of their sport around the world. The American film was nominated for a 1972 Academy Award for Best Documentary Feature. Brown’s idea was to show the unique talents needed for the different forms of racing.

Due to the popularity and influence of the film, several follow-up films were produced:

If you’ve watched On Any Sunday, you might want to follow that with On Any Sunday: The Next Chapter, a film from Bruce Brown’s son, Dana.

Travis Pastrana, Ashley Fiolek, Brad Oxley and others are featured in the film in an exploration of today’s motorcycle culture.

Why We Ride is a story about people with a desire to dream, discover and explore. From a kid’s dream come true, to a retiree’s return to freedom. From a family riding together on the sand dunes, to hundreds of choppers carving through the canyons – the bond is the same. It’s about the passion of the riders and the soul of their machines.

The film shows the passion in riders and the communities built around people chasing the same dream.

This British television series sees Ewan McGregor and Charley Boorman embark on a gruelling quest to motorbike from London to New York. Going east through Europe, Asia and then to Alaska, Ewan and Charley experience different cultures and have to overcome the elements and adversity.

Riding Solo to the Top of the World is a 2006 documentary film in English language directed by Gaurav Jani on the Chang pas of Ladakh, in India, about a journey of self-discovery.

The documentary shows the unique experience of a lonesome traveller, who rides his motorcycle all the way from Mumbai to one of the most remote places in the World.

This film recounts the well-known written memoir of the 23-year-old Ernesto “Che” Guevara who went on a motorbike expedition across Central & South America in 1952. The movie is a modern re-enactment of that journey.

The story is a motorbike adventure story focusing on the developing ideas of a young Che Guevara who becomes inspired while driving around the continent.

This Lonely Planet produced motorcycle television series follows a journey across the Great Dividing Range by Australian Steve Crombie, a twenty-nine-year-old Australian thrill-seeker who travelled half way round the world in search of adventure but had never looked in his own backyard.

That all changed when Crombie embarked on an 8,000km motorcycle journey along one of Australia’s most beautiful landscapes: The Great Dividing Range.

Anthony Hopkins stars as Burt Munro, a man who never let the dreams of youth fade.

New Zealander Burt Munro spent years perfecting his classic Indian motorcycle. The year is 1967, and Burt takes his machine to Utah’s salt flats, where he attempts the impossible, using his dream bike to set a new world’s record for speed.

The biographical sports drama film is based on a true story, the record Munro set still has not been broken to this day.

A father and son take on India and Nepal’s most majestic and treacherous terrain in this 4500km journey. 150cc motorcycles carry them through the struggles of deadly roads, altitude sickness and their past differences.

The father and son angle allows for a unique take on a classic motorcycle journey film.

A story of two mates who embark on a real moto nomadic adventure. The 7000km journey from Austria to Egypt through 7 countries includes plenty of off-road travel, showing a lot of skill. Riding on KTM 500EXC’s dirt bikes, the plan was to chronicle all of the unseen places one can access on a dirt bike.

They ride without luggage panniers but carry backpacks with their gear to travel as light as possible, with sleeping mats attached to the side.

Nick Sanders is the only person ever to have held multiple records for having motorcycled and bicycled full loops around the world. He has ridden a motorbike around the world 7 times! On his fastest circumnavigation he rode 19,625 miles (31583.4 kilometres) in 19 days and 4 hours. It rightfully earned him the title ‘the Fastest Man Around the World’.

This “ordinary man in his extraordinary world,” as he describes himself, has also cycled to the source of the Nile, across the Sahara to Timbuktu and the length of South America before taking two narrowboats across the English Channel and along the Danube to the Black Sea and back.

A landmark film of 50s rebellion by director Laslo Benedek, producer Stanley Kramer, and screenwriter John Paxton. The Wild One was the first feature film to examine outlaw motorcycle gang violence in America.

Through the open country and desert lands, two bikers head from L.A to New Orleans, and along the way, meet a man who bridges a counter-culture gap they are unaware of. Easy Rider tells the tale of a search for freedom.

If you’re after something funny, Wild Hogs may be just what you’re looking for. A group of suburban biker wannabes looking for adventure hit the open road, but get more than they bargained for when they encounter a New Mexico gang called the Del Fuegos. The movie stars Tim Allen, Martin Lawrence, John Travolta and was directed by Walt Becker.

Motorcycle stuntman Johnny Blaze (Nicolas Cage) sold his soul to save the life of a loved one. Now, he transforms into a fiery, avenging agent of justice at night wherever evil roams. The movie is an American superhero film based on the Marvel Comics character of the same name.

A dire medical diagnosis prompts a young man (Joshua Jackson) to search for meaning in his life via a cross-country trek across Canada on a vintage motorcycle.