The History of Norton Motorcycles 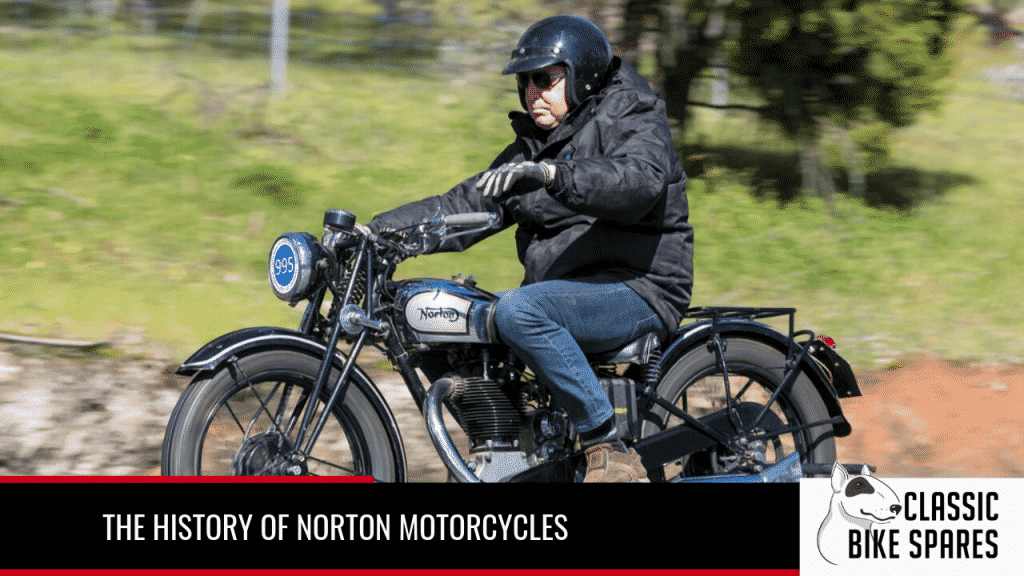 Norton Motorcycles has been on the scene since 1898 when it was founded by James Lansdowne Norton. The company specialised in “fittings and parts for the two-wheel trade.”

By 1902, their modest business in Birmingham, England had begun to manufacture motorcycles with Swiss and French engines. Six years later, they added a Norton-built engine to their range. This was the start of Norton’s long history of producing single and twin cylinder motorcycle engines.

By 1907, Norton-built motorcycles were winning TT races, including the first-ever Isle of Man TT, which fuelled their involvement in the racing industry well into the 1960s.

That’s not to say that it has always been a smooth ride. In 1913, the business had begun to decline and had to be saved by its main creditors, R. T. Shelley & Co. Norton Motors Ltd was formed under joint directorship of James Norton and Bob Shelley.

The company produced bikes for both World War I and World War II, and their performance shaped Norton’s reputation for reliability. 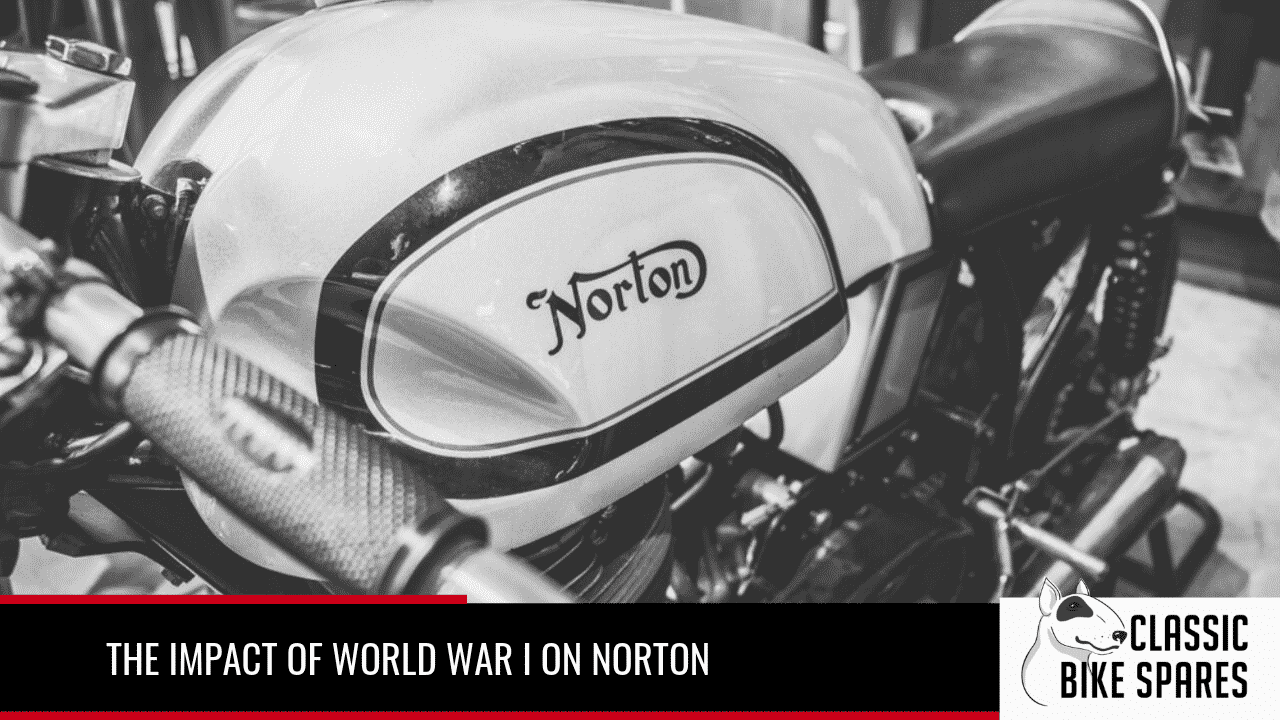 The impact of World War I on Norton

Norton continued production with their 3.5 hp and Big 4 singles well into the war period. However, the Ministry of Munitions issued an order in November 1916 that work on motorcycles would not be allowed unless a company had a  permit, seeing a huge decrease in sales. This was intended to focus manufacturing capacity on the war effort.

In 1918, a Norton advertisement stated that “The ministry are taking the whole of our present output, but we have a waiting list.”

It wasn’t until 1919 that the 490cc Norton re-entered the public market, and with the production of Norton motorcycles up-and-running again, they moved to a more spacious factory at Bracebridge Street.

By the time the 1920 TT races came around, more than half the finishers were riding Norton machines.

James Norton died in 1925 at the age of 56, after two years of bad health. However, the production of Norton motorcycles continued with the release of the CS1 in 1927. With the outbreak of World War II in 1939, Norton withdrew from racing and positioned itself as the main supplier of military motorcycles to the British Army, manufacturing almost 100,000 WD16Hs for the Royal British Army.

Norton motorcycles gained a reputation for their reliability and good handling on the road. They were regarded so highly that by the time the war was in full force, almost a quarter of all British military motorcycles were Nortons. Some Norton motorcycles remained in military service until the late 1950s.

Norton resumed its production of civilian motorcycles after the war, with Nortons winning every Isle of Man Senior TT from 1947 to 1954.

Despite their pre-war dominance, Norton’s single-cylinder machines faced stiff competition from the multi-cylinder Italian machines and AJS. Norton gradually increased its range with a twin-cylinder Dominator, designed by Bert Hopwood.

In 1950, Norton introduced the Featherbed frame. This lightweight but strong frame was fitted to Manx Nortons to help manoeuvre the turns of the Isle of Man track, improving the bike’s handling and contributing to Norton’s racing success.

By the following year, the Dominator was available with the Featherbed frame and its success meant that demand for standard frames quickly diminished.

In 1952, Geoff Duke, riding for Norton, was the world champion in both the 350cc and 500cc classes, and the following year he was awarded the OBE for services to motorcycling. Although motorcycle sales went through a recession in the 1950s, and Norton Motors Ltd was only a small manufacturer, Norton sales flourished. A series of Norton Dominator twins of 500cc, then 600cc, then 650cc, and then the 750cc Norton Atlas kept sales buoyant, especially with sales to the United States.

Despite Norton’s racing successes, Japanese manufacturers started producing motorcycles that were faster and cheaper, drastically impacting the sale of Norton motorcycles, and the company found themselves in financial difficulty once again.

Rivalry from Japanese manufacturers continued to force a decline in the British market throughout the 1960s. AMC became insolvent and was reformed as Norton-Villiers in 1966. In 1968 the new 750cc Norton Commando model appeared, with the engine and swing arm isolastically insulated from the frame with a series of rubber mountings. This kept the vibrations from the rider, giving a smooth comfortable ride.

The Commando easily outperformed contemporary Triumph and BSA twins, and was the most powerful and best-handling British motorcycle of its day. The Commando was a best seller, and voted #1 Motorcycle of the Year a number of times in Britain.

Norton released the Combat engine in January 1972 but despite respectable initial sales, the engine had frequent failures with the crankshaft main bearings. In 1973, 850cc models appeared, giving more torque. An electric start arrived with the 850 Mk3 in 1975.

Sales were respectable but the company declined financially and became insolvent again in 1975.

In the 1980s, Norton went through several incarnations – the rights to the Norton name were divided between multiple companies spanning across several countries.

The Norton brand was re-launched in 1988 and by 1989 Norton made a triumphant return to racing with Steve Spray winning the British Superbike Championship on a JPS motorcycle, a victory which was repeated in 1994 by Ian Simpson.

Despite the continued decline in the commercial market, Norton’s Wankel-engined Interpol 2 motorcycle proved popular with British police forces and led to the development of a civilian version called the Classic.

In 1992, Steve Hislop won the Isle of Man Senior TT on an ABUS Norton, seeing the first victory for a British bike in almost 30 years.

The stability of Norton Motorcycles was short-lived and once again Norton was faced with financial decline. The company’s stockholders withdrew investments throughout the 1990s due to mismanagement of the business. Norton flirted with the idea of producing a 1500cc Norton called the Nemesis, but the plan quickly fell through.

In 2003, US native Kenny Dreer bought Norton and modernised the design of the Commando, before suspending operations in April 2006.

The Norton brand was purchased by entrepreneur and motorbike enthusiast Stuart Garner in 2008, who established a new Norton factory at Donington Park, where its home remained until 2013, when Norton Motorcycles moved to its present location at Donington Hall.